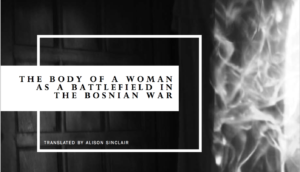 The Body of the Woman as a Battlefield in the Bosnian War by Matei Visniec, opened on September 7th as part of the Madness, Society & History Theater Festival at the New Stage Performance Space in its New York City Premiere.

I played Kate, an American psychologist, who finds herself in a NATO convalescent home after working to excavate mass graves in Bosnia. She meets Dorra who was raped in the war. Through their connection, they form a bond that heals them both.