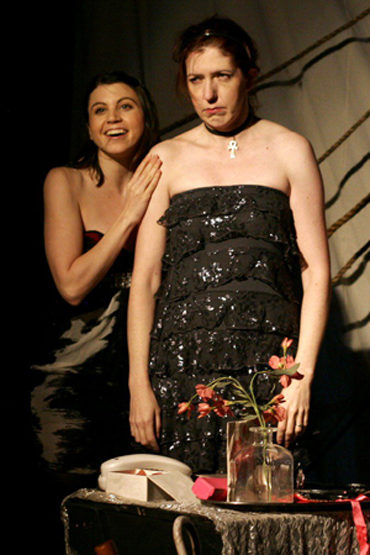 Much Ado About Everything
Acting, Theatre

Claude’s journal.  Seattle. 1994.  Ahem.  ‘Two households, both alike in dignity’…. no, that sucks. Let’s see – ‘As I remember Adam, it was upon this fashion bequeathed to me’…wait, what? What the hell does bequeath even mean? ‘If music be the food of love, play on’.  Perfect!  I mean, whatever.  It’s okay, I guess.  Actually, that band sold out ages ago.  I’m going to tell you a better story.

The good: We won Battle of the Bands, life is sweet, and I’m madly in love with Piper but have no friggin idea how to tell her.  The bad: Ben’s constantly arguing with Betty (why won’t they stop already?)  I have no idea what to say to kinda convince her to marry me. The solution: a couple of big old white lies to convince Piper I’m the one and to prove to both Ben and Betty that the other’s not so bad.  It’s a perfect plan (even with my chronically evil and depressed drummer lurking and the gossip hounds abounding – but why would those things get in the way?) Kinda funny that I mentioned them without provocation.

Whatever.  So, tour bus has just returned home.  Cue the babes, the beer, and Piper (sigh).  Wish me luck. PS – ‘The Solution’ is kind of catchy.  Might be good nickname for myself.  Signed, Claude.

Mid 90’s Seattle – a society apart from the world and totally bored with everything America. There’s no better place for an adaptation of Shakespeare’s ‘Much Ado About Nothing’. Especially since everybody around seems to have a hand in a few different schemes and open mind to what they always thought was true. Enjoy the gossip, the music, and travel back a few years to when plaid and ripped jeans were the uniform for the lovers and fighters alike.

Join the celebration and see if you can keep up with the mismatched lovers as they dive through enough gossip to make the Enquirer team blush.